A report from Sky News is warning that nearly 100,000 children are “missing” from school registries and not attending school. According to the report many schools across the country are experiencing record low attendance, with some children simply disappearing from the system.

The concern is that some families – especially poor families – are being damaged by not taking advantage of free school meals or other services such as “healthcare advice”, provided by the state.

As you’d expect, MPs are being urged to “take action”.

What action? I’m glad you asked.

It could be as simple and exploitative as fining parents who don’t send their kids to school that’s what James Cleverly the education secretary wants to do. Because arbitrary fines during a recession is absolutely the best way to help out poor families.

It gets worse though.

Take your kids out of school while you can folks (here’s a guide on homeschooling, if you need it).

2. Going cashless…one franchise at a time

This picture appeared on social media this week… 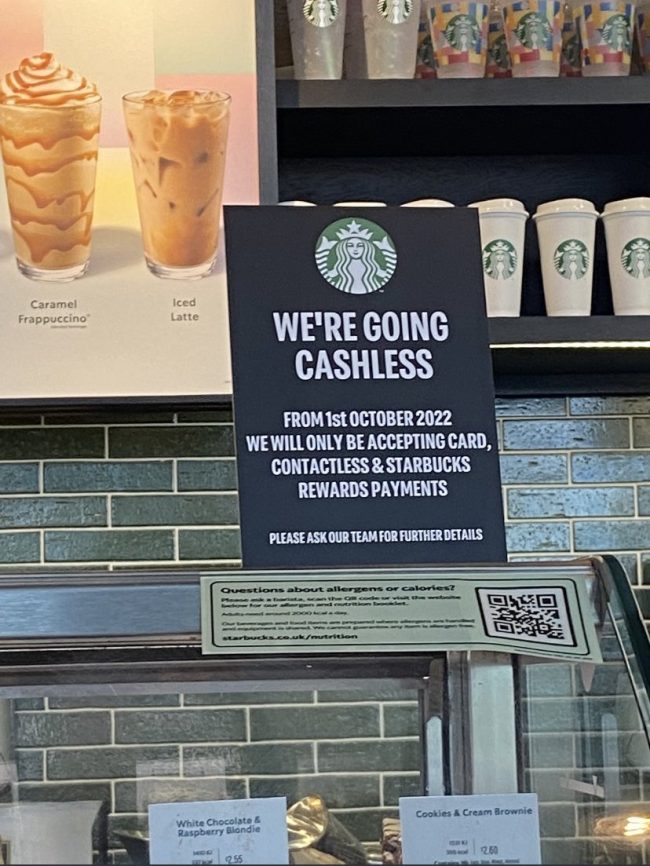 It’s a sign inside a Starbucks, announcing the plan to go “cashless” from October 1st of this year. Many people reacted angrily to the news.

Then Reuters Factcheck stepped in and claimed Starbucks has no policy of going cashless in the future, and they don’t know in which outlet that picture was taken.

This is a nice little insight into just how much effort the Factcheck team put into their work, because about 20 seconds of googling revealed to me that while the precise location of the picture was unknown, an identical sign has been put up in the UK town of Smallthorne, and a third location in nearby Stoke-on-Trent also has the same sign.

According to Snopes, a further outlet in Bradford is also taking up the policy.

So that’s at least four outlets, each with not just the same policy, but the exact same sign.

When contacted for comment by the Stoke Sentinel, Starbucks again asserted they have no company-wide policy of going cashless…but they do have some “franchise partners”, and any one of those franchises could independently decide to only accept card payments going forward.

Anyone of them or, you know, all of them. Individually. One at a time. Using identically worded signs.

3. Laying the ground for energy rationing

The latest move in the Ukraine sanctions tug-of-war has seen the G7 attempt to “cap” the price of Russian oil, in retaliation Russia has shut down natural gas supplies through Nordstream 1 (supposedly for maintenance, but do you really believe that?).

As a result, many countries in Europe find themselves without a supply of natural gas, with Autumn and Winter bearing down on them.

This is, of course, entirely the point of the whole exercise. That and the idea of energy rationing, which the press have been discussing enthusiastically for the last 24 hours.

Germany, France and Italy are all said to be considering it.

For some reason, even the UK could fall victim to it, despite getting very little electricity from Russian gas.

So, will there actually be rationing? Maybe, maybe not. But whether or not it ever materialises, the narrative serves a purpose and can be directed in several ways.

The dangling sword of rationing makes expensive electricity more tolerable, consumers will pay anything to make sure their power stays on.

Later on, it can also be parlayed into a political Success Story, as governments claim to have handled the crisis so well they managed to avoid rationing.

Or it can be used to promote the Green New Deal by reporting “increased reliance on renewables saved us from winter rationing”, or something like that.

BONUS: Bad optics of the week

Joe Biden made a “landmark” speech in Philadelphia this week, coming down hard on Trump supporters and “MAGA Republicans” as a “threat to democracy”.

It was a long rambly affair, barely coherent in patches, repetitive and vague but the tone was definitely unsettling.

And the visuals, well…

It’s hard to believe the lighting designers didn’t realise how threatening and quasi-fascistic this looks.

Bob Moran does his thing…

All told a pretty hectic week for the new normal crowd, and we didn’t even mention the UK aid agencies promoting insect farming in Africa or Argentina’s “mysterious” pneumonia.

This Week in the New Normal #48